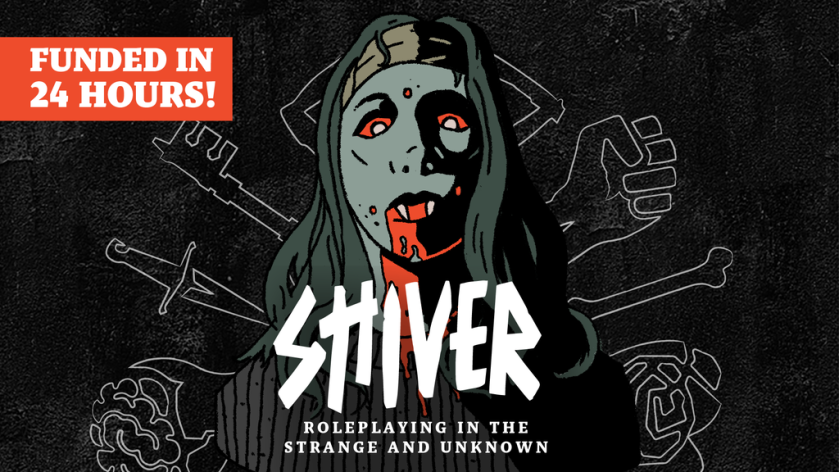 Nothing beats a proper presentation in order to present and market your roleplaying game (or any other product) well in a crowdfunding. Well, it’s even better if you show your progress and something to try out your product. Unfortunately, this is often not the case, so the positive examples like Shiver stand out. I think this should be rewarded, so here you have my preview for the upcoming roleplaying game Shiver.

Shiver pays homage to films and series from the horror, mystery and pulp genres. The X-Files, Jurassic Park, Alien, Dracula or Stranger Things are named as inspiration. The players can experience such adventures themselves and all with a single set of rules. This is done using the Archetype Dice System specially developed for the game. The players build their own individual character by choosing their archetype, background and special skills. Because these elements are very broad, they fit into many different genres. There is an archetype for each of the six core skills plus one extra. The Warrior for Grit, the Maverick for Wit, the Scholar for Smarts, the Socialite for Heart, the Weird for Strange and the Fool for Luck. The Survivor is an all-rounder and accordingly stand-alone.

Tests are made with two different types of dice, D6 and D8. The game has special dice, but conventional dice can also be used. There is also a free dice app that automates some of the other game elements. This means you can play Shiver anytime and anywhere, even without the special dice. In addition, the character sheet is already available as a fillable PDF! Some of the big companies in the role-playing game industry can learn a bit from that. The game is explicitly called online-friendly and with the tools supplied, this is definitely the case.

However, back to the test, the player states his intention and the director (the name of the game master) decides on the core skill. You roll D6 equal to this skill. If the character also has talent for the skill, you add D8 accordingly to your talent. Each of the core skills is shown exactly once on one of the special dice. The player adds up the number of the required symbols and compares it with the difficulty. The W8 show a different number of successes and Strange Symbols. The successes of the talent dice are added to the test. The strange symbols have a variety of options and effects. If the appropriate icon doesn’t appear, it doesn’t necessarily mean a failure. If you have several of the same symbols, an alternative solution can also lead to success, which I find incredibly exciting.

The Quickstarter for Shiver contains the most important rules, such as fear, luck points and the behavior of monsters. Depending on the degree of danger, opponents react differently to damage. The principle reminds me a little of the monster attacks from Forbidden Lands. Therefore, the monsters are a lot more unpredictable. I also really like the Doom mechanics. The clock fills up through decisions, talents or unsuccessful tests and the game master uses this for various effects. There is also an interactive PDF to track doom for paperless games here. A small scenario rounds off the Quickstarter. The story is clearly inspired by a well-known video game and film series and gives a good insight into the possibilities of the system. I’ll try out the adventure as soon as possible. Both in terms of the presentation and the material supplied, Shiver makes a terrific impression and I’m looking forward to the finished product.

One thought on “Shiver – Preview”