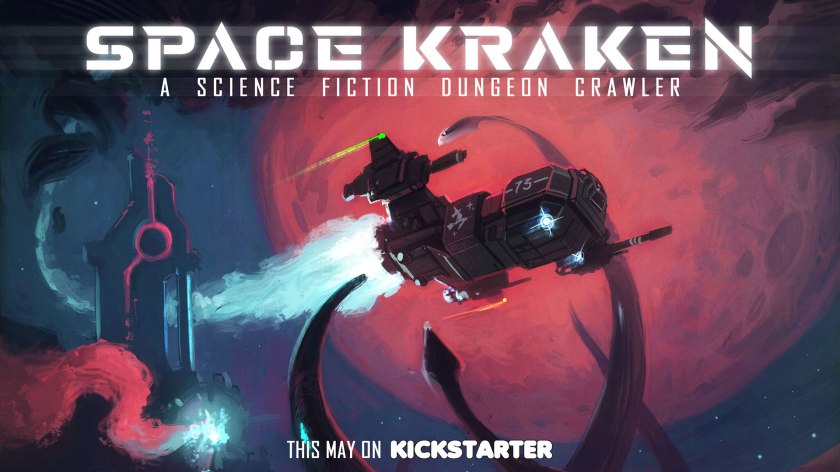 Space Kraken is a very ambitious project, which first aroused my interest with its presentation and the artwork. Its unique selling point, however, is its gameplay, which I have never seen in an analogue game. I received a prototype, a demo, so to speak, and I started my adventure. In this preview, I want to give a general overview of what to expect from Space Kraken.

What exactly is Space Kraken?

My first association would be the well-known adventure books or Choose your own adventure, as adventures in which you always make a decision and then read on with the corresponding number and experience a story. In fact, this is far too short-sighted, because Space Kraken does and can do a lot more. My description would be the analogue implementation of a rogue-like video game. As in the adventure books, you have different choices, but these are much more complex and the variety of story lines (more on that later) gives you the video game feel.

Space Kraken is set in the future and the earth is a radioactive landfill. Humankind wanted to defuse the situation with an octopus, which is supposed to remove the radiation and the garbage. This encroachment on nature failed, of course, and that octopus mutated and travelled into space. You embody a crew, travel through space and you have to decide whether you will finally face the Kraken and thus get rid of the dead zone it has created or you want to run.

The whole book is a spiral-bound book in A4 format. Numerous pages can be folded out so that you can see them at any time, for example the crew members, your own spaceship, opponents or the overviews of combat, flights or the story. There are videos from the maker on how to use the book and there I saw the practical advice that you should make sticky notes for the important parts, because you will scroll a lot during the game. The layout is clear and very appealing to me, but the pictures are absolutely awesome. A very big compliment must go to the artist here. Entries are made with pencil, which you then remove repeatedly. It has been shown to me here that it definitely leaves its mark. However, there is a solution, you can get suitable foils and foil pens through the Kickstarter campaign, which should make the whole thing a bit more durable.

The sequence of play

There are some preparations to be made, you have to separate the fold-out elements with the scissors in some places and then you can choose your crew. There are suggestions for ready-made characters, but you can also choose the values ​​and skills yourself. You can also choose the difficulty of the game. For example, you can choose the simple game and save it as you like (you take a photo of your story overview) or you can try it in hardcore mode. You collect achievements while playing that affect later adventures, hence the association with the rogue-like games. For the storylines, you choose variables, in the demo there are four storyline and each line has four variables, which makes for a lot of variety.

During the game, you first work through one storyline after the other. Here there are events, options that influence the story and you can come to very different paths und outcomes. I have to admit that I had to watch the instruction video to understand the cycle of play. Therefore, I recommend watching them.

If you have reached the next pointer (an intermediate point), you can discover new places, improve your spaceship or re-explore familiar places. There are various generators and every new flight carries the risk of meeting an opponent. During the battles (both on the ground and in space), you follow a pattern. Many entries for enemies are coded very briefly, but everything is explained in the actual rules section.

If you explore a place, everything is also determined by chance. There is a variety of maps for the dungeon levels. These are also coded and offer a variety of challenges, enemies and loot. The demo is clearly slimmed down, the final version is much more extensive, also thanks to the many stretch goals achieved.

There are eight characters to choose from in the demo. You can take the suggested stats and equipment or build the character yourself. Each character has six attributes (Agility, Strength, Tech, Charisma, Range and Melee). Skills here correspond more to talents from other games and allow rules to be circumvented or modified. Six-sided and one twenty-sided die are required to play. How the dice are used depends on the type of test. In combat, the difficulty of the weapon (for example 4+) must be achieved with a d6. With points from the attribute, you can get lower the difficulty of the test (e.g. two points range to turn a 4+ into a 3+).

I absolutely love the idea behind Space Kraken. When playing solo, I honestly always lack the motivation to play because I like togetherness and the exchange with other players. With Space Kraken, a lot is simulated by the system itself, the comparison with a rogue-like is very appropriate. On the other hand, I also need to get used to the game; some things didn’t go completely smoothly for me on my first playthrough. In a few places I would have liked more precise descriptions, because the English is very bumpy in some places. Now and then, I had the feeling that the Google Translator was being used here for the translation from German. Here, a little attention should definitely be paid to it, as well as general spelling errors.

Nontheless, I had a ton of fun and after a few attempts, it runs very smoothly. Due to the many variations and possibilities, you simply cannot compare it to an adventure book. Space Kraken is much more and if you were to apply this principle to a fantasy setting, then, in my opinion, you could create an A+ Darkest Dungeon clone in analogue. I will continue to play a little more and then write a more detailed conclusion on it.

One thought on “Space Kraken – Preview”